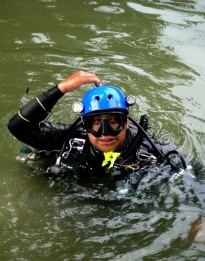 Andy was born and raised in Mactan Island where he was introduced into community service at an early age by his protestant church minister father and public school teacher mother.

After finishing College, Andy was involved in community development work which sent him to different areas in the Visayas and to the outskirts of Masbate, organizing farmers and fisherfolks, facilitating capability building trainings and socio-economic endeavours for their organizations.  Additionally, he organized and facilitated community camps for children in the Youth Development Work program .

2001 was when Andy entered government service.  With his knowledge in radio systems, he was instrumental in the establishment of the comprehensive radio communications network of the City of Lapu-Lapu which linked the barangays with the frontline service departments and offices of the LGU for the efficient delivery of service and immediate response actions during emergency, disaster and calamities. He was also involved in the conceptualization and design of the  City’s traffic management schemes.

Certified as a scuba diver in 2005, Andy’s diving is mainly  work-related and devoted in the furtherance of the Coastal Resource Management Program of Lapu-Lapu City, particularly  on the establishment, monitoring and evaluation of marine protected areas and coastal law enforcement.  Currently, he is the Coastal Operations Coordinator of the  City of Lapu-Lapu.

Andy was trained in cave diving techniques on July 2013 under the tutelage of Doc Amores of the FCD Team.