The Philippine Speleological Society (PSS) held their 19 th Annual Cave Congress in the Municipality of Baggao, Cagayan Province. Several caving groups such as GAIA Exploration Club, Tayabas Caving and Outdoor Club, Sierra Madre Outdoor Club (SMOC), Sang-at Salug to name a few as well as representatives from the Dept. of Environment and Natural Resources (DENR), Dept. of Tourism (DOT) and LGU’s from around the country were in attendance to participate in this 5 day event where they held talks, workshops, programs and exercises pertaining to the management, preservation and development of caves.

The LGU of Baggao as host requested for an assessment and consequent classification to start a cave management plan for their caves. In this regard, we were invited to help with this assessment and contribute to their cave management plan. The focus for this activity was their famous Blue water cave which is an over 2km long cave system and is home to the largest Olympic Pool or cave sump in the Philippines. FCD was tasked to assess this underwater component thus resulting in another historic first as there had never been any previous diving activity in the area.

As the story goes, the Blue Water Cave was discovered by an elder in the mid 70’s. It is currently being developed as the town’s main tourist attraction and the improvement of the road access to the cave and the creation of a new bridge are in progress to support the town’s objective. This cave is located 26 km. from the town proper. The Blue lagoon (as seen on image below) is a 20 minute hike from the parking/registration area through dense forest trail.

DENR personnel mentioned that the possibility of copper present in the composition of the water could be the reason for its bright baby blue color. We think it could also be the disturbed sediment from the bottom mixing with water due to the influx of tourists that come to swim making it a cloudy blue (compare 1st photo of the lagoon taken before tourists arrive vs. the photo above taken in the afternoon after bottom silt has been disturbed).

The presence of the New People’s Army (NPA) in the valley is a factor to consider as a perceived possible security threat thus we were only allowed to go to the cave for 1 day (6am-3pm) with police and army detail present. So in the end we were only allowed to dive one area despite the original plan of exploring several interesting sites.

The Olympic Pool (so named due to its size) is located in the first chamber of the Blue Water Cave System.

Members of GAIA, PSS, DOT and DENR who have been to the area say that it is the largest cave sump they have ever seen in the Philippines. It is fed by a strong waterfall coming from a 3 meter pitch directly beside it, towards the inside of the cave.

The dive team composed of Juan Naval and the author was tasked to explore the possibility of any leads from beneath. This was the first diving exploration so there was no available data prior to the dive. 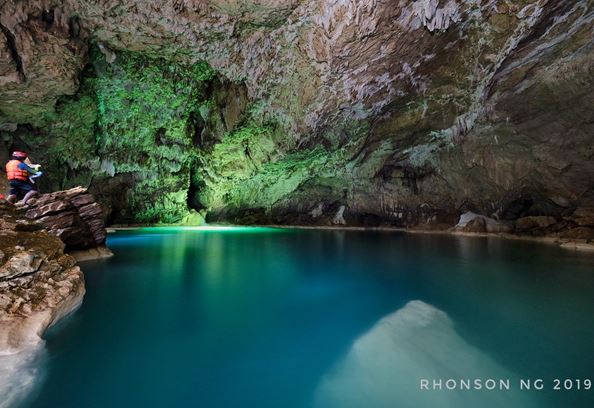 On the surface, the water looked very blue but hazy. One of the first things we noticed in the chamber was the lack of bat species but we were told that they preferred the inner chambers deeper in the system. The water had a faint but distinct ammonia-like odor similar to Malaog Cave in Sampaloc, Quezon but not nearly as intense.

The underwater terrain was for the most part, limestone, pebbles and boulders all covered in calcite silt. Everything was so white you could already imagine how it would be to dive on the moon. Water temperature was a cold 22°C with a maximum depth of 8.9m. Visibility was 1m at its worst and 2-3m at its best.

One of the most significant things we noticed was that the environment underwater and above was very clean even if the general tourists were able to access the cave up to this first chamber. Only foreign objects such as logs and branches were present in the pool. No plastics or trace of human trash was observed. The texture of the stones was very powdery and highly sensitive to movement. In total the dive lasted 59 mins.

Underwater, a thriving biodiversity of stygofauna such as eels, small crabs species, juvenile dragonflies and fresh water cave ghost shrimps were documented. The presence of possible algae growth in the rock formations in the 2m range was also noted.

In total, we were able lay a circumferential line of approximately 90m resulting to 28.6m in diameter thus totaling to 644.578 square meters as a whole (approx.). No further leads were observed.

After the dive, we made a list of recommendations for the Local Government Unit to help maintain the cleanliness of the river that feeds the cave:

Maybe all this change in ecosystem could be the reason for a beginning algae bloom in the lagoon. But all this has to be confirmed with further water sampling.

As for cave diving, the Olympic pool is not strictly an overhead dive but the sensitivity of the calcite layered on the entire bottom is easily silted out and can be a cause for concern if not properly trained.

Filipino Cave Divers was awarded a plaque of appreciation during the closing ceremonies of the 19th PSS Cave Congress for their participation in this endeavor.