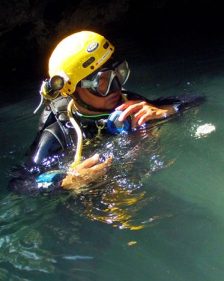 Doc Amores, known in the island as Docboy, is as native a Mactan Islander as Lapu-Lapu was. He was born and raised in the old Opon Poblacion nurtured in his early years by a family of 34 individuals and quintessential Poblacion neighborhood.

After a very long convoluted carrier pursuing his dream to become a surgeon and practicing his specialty of Plastic Surgery in land-locked West Virginia (USA), he has turned full circle and is now back in his old neighborhood, a semi-retired Aesthetic Surgeon. He has a wide variety of interests, impacting the people of Mactan Island through Amores Charities Inc. which he formed in 2001.

He holds a number of certification cards in diving, among which is Cave Diver (NACD, USA), Rebreather Recreational Instructor (IANTD, China) and Photography Instructor (IANTD, China). He did his cave certification through the National Association of Cave Divers (Card #3042) in the extensive cave systems of Northern Florida (USA). His discovery of the Pawod Underwater Cave System in Mactan Island during solo exploration dives in 2002 marked the birth of cave diving culture in the Central Philippines.