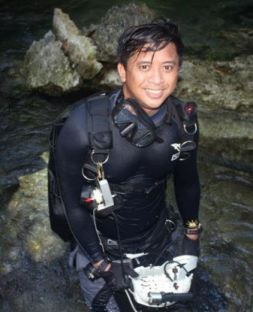 Jake was born and raised in Surigao City, Philippines. He went to high school at the Ateneo de Manila, and spent a couple of years in college in the same university before choosing a military education.

He has since moved back to the private sector, serving in various capacities such as president of the Surigao Chamber of Commerce and Industry, and representative of the Mindanao business sector at the Mindanao Development Authority. He has recently retired from both positions, and even declined an appointment as a top level official in government. He now serves as a government consultant for underwater search and recovery projects, and figured as a coordinator for the successful 2012 sonar search of the plane wreckage of the late DILG Sec. Jesse Robredo. Jake advocates the use of modern diving technology in government and military work, particularly in search and recovery.

His first cave dive was in Silop Cave in Surigao City where he was almost lost in a new chamber with his buddy. Thereafter, he pursued cave training to become a certified full cave diver.

Jake Miranda, aside from being a hotelier and an entrepreneur, is now a fulltime SDI/TDI diving instructor and cave diver. He operates Punta Bilar Dive Center in Surigao City, and JJ Dive Center in Butuan City. He is married and has four children.

One thought on “Jake Miranda”