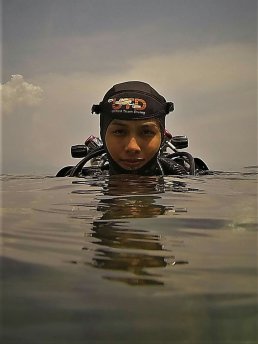 Jackie was an active swimmer ever since she was a young child but it was only in 2012 that she could no longer resist the pull of the underwater world.

Always considered a natural athlete by her coaches, she would excel at any sport she would do. Scuba diving, of course, was no exception. Spending most of her weekends (sometimes even weekdays) in Anilao inevitably led to a consequent growth of passion. She quickly gained hours of dive time and a wealth of experience diving with many of the local dive masters around the area.

As she was working her way up the recreational diving ladder and many fated conversations in between with technical divers, she learned about the rigors and demands of technical and cave diving and an ultimate pursuit was born. Now thirsting for another level of knowledge and always one to pursue her goals, Jackie realised the need to take different courses in line with them.

She methodically sought training from top instructors around the Philippines, understanding the need for the highest quality of education in every step and building experience in between with total commitment and old-fashioned hard work.

In 2016, she finally joined Unified Team Diving and is actively pursuing higher levels of technical diving. Her work in Pawod with Bernil, Jaime and Juan was calm, independent and collected. Things you’d expect of a seasoned cave diver.

Jackie currently resides in Manila, but is frequently in and around the Philippines.

On being part of the Filipino Cave Divers. “Didn’t expect it. Many emotions. It’s difficult enough to prove yourself as a girl in a male dominated industry and to be part of FCD, is humbling validation. I’d say I’m more than deeply honoured to be part of Filipino Cave Divers, the hard work has paid off and another level of learning from everyone in FCD is something I look forward to. This is definitely one of the highlights of my life and dive career.”